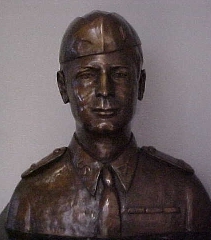 First Lieutenant Herman M. Baxter who died in the service of his country from German mortar fire in European Arena October 16, 1944 distinguished himself at the University of Mississippi in the following ways: BA 1943, Student Body President, ODK, Hall of Fame, Who's Who in American University, Cadet Captain, Scabbard of Blade, and Vice Commander Hood's Brigade. He received the Bronze Star and Purple Heart in service to his country.
"He stands in the unbroken line of patriots who have dared to die that freedom might, live and grow, and increase its blessings." "Freedom lives, and through it, he lives--in a way that humbles the understanding of most men." -Franklin D. Roosevelt, President of the United States of America.

Constructed in 1948 as a men's dormitory having 19,380 square feet with a housing capacity of 90 residents. The building was named after Herman Baxter, President of Associated Student Body during 1942-43 session, who was killed in action in World War II. Baxter Hall was the home of some distinguished Mississippians one of them being James Meredith, the first black student to enroll at the University of Mississippi in 1962. The dorm housed university male students until 1972. Subsequently, it was phased out of men's housing and used as a storage facility since newer facilities were constructed on campus.

Baxter Hall was one of four dormitories constructed to help provide housing for the many students enrolling after World War II. All four dormitories were named for prominent alumni: a Rhodes Scholar, Walter H. Drane Lester, who was killed in an automobile accident in 1941; and three young men who succeeded each other as student body president and were killed in action in 1944: Gus Gerard, Billy Sam, and Hermann Baxter. A group of faculty who had known these men as students recommended that they be honored in this manner.

The original dedication ceremony for all four of the dorms took place in November 1949 in the courtyard between the dormitories. Dean of Men R. Malcolm Guess served as chairman of the Dormitory Dedication Committee. Senator John W. Kyle of Sardis spoke about Drane Lester; Representative N. S. Sweat, Jr., of Corinth, on behalf of Gus Gerard; Arthur B. Clark of Indianola, about Billy Sam; and Representative William Winter of Grenada, also a student, on behalf of Hermann Baxter.

The building was originally constructed at a cost of $128,597.21. The architect was L. L. Brasfield; the general contractor was M. T. Reed. The blueprints for Baxter and the other three halls were based on Navy barracks, which were much cheaper to construct than a normal men's residence hall. As a result, the University was able to construct all four men's dormitories, primarily from the allocation received for construction of one dormitory.

Baxter Hall was renovated in 1990 at a cost of $1,158,557.00 to house the University telecommunications facilities and offices. The architectural firm was Eley and Associates of Jackson, and the general contractor was J. O. Hooker and Sons, Inc. of Thaxton.

The program of rededication featured Governor William F. Winter, who spoke at the original dedication.

The University is indebted to Hermann Baxter's brother, Lionel F. Baxter of Jacksonville, Florida, who provided information about the Baxter family and who donated a bust of Hermann Baxter, sculptured by Dr. Robert Mayer, and a commemorative plaque, which have been placed in the lobby of Baxter Hall to serve as memorials to Hermann Baxter.

Please come by and visit the office at your convenience.